I recently received a bundle of nutritious ingredients from a company called Nutriseed, in which was a fine beige powder called maca root powder.  I’d researched maca and its many benefits quite a while ago, but refrained from using at that time as I was pregnant with Reuben.  I patiently waited until after breastfeeding to use this magical powder and finally in January, this year, I could start seeing what all the fuss was about!

Maca was used during the time of the ancient Inca Empire to give their warriors strength, stamina and power before battle.  It grows high up in the Andes Mountains of Peru and has been cultivated as a crop for at least 3000 years.  It is a root vegetable which looks similar to radish.

I’ve now been using Maca for two weeks, almost daily, and I’m pleased to report my energy levels seem increased even though I’m still having interrupted sleep (thanks to my 3 year old and 11 month old!), I feel much more alert soon after consuming and in general I feel pretty good.  The taste is not displeasing either, like some superfood powders.  It has a slight butterscotch flavour, but when mixed into a smoothie it’s barely noticeable, if at all.

How have I been using it?  I’ve used it in my breakfast almost every morning.  I’ve used my small Nutri Ninja cup to blend a large banana with almond milk, a couple of tablespoons of flaxseed, a tablespoon of oats, a tablespoon of desiccated coconut, a teaspoon of cacao and a teaspoon of maca.  Absolutely blooming delicious!  I drink it straight from the cup with a chunky metal eco straw and it’s so tasty.  It’s a great start to any day and I’ve enjoyed it almost every morning since I’ve had the maca! 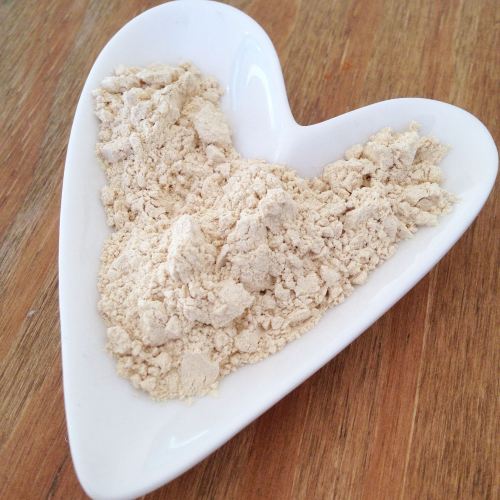 I’m sure there are plenty of other ways to use maca, but as it’s a powder I quite like it blended into drinks.  It can also be whisked into a cacao hot chocolate with warm water and almond milk for another simple and nutritious drink.  If you are a baker (I’m really not), you could experiment by adding it to your mixtures.  You can replace a quarter of the flour with maca and they should still taste just as good.  Maca cakes.  Imagine that!

I’ve been reading a stack of articles to find out what this super powder is meant to do.  Here’s an easy to digest roundup of the claimed benefits of maca:

It’s basically a wonder food, with a great taste, that can easily be consumed every day!  I’m definitely impressed by my energy levels so far.  I read somewhere to start with half a teaspoon per day and build this up to a maximum of one tablespoon only per day.  It could take a couple of weeks to notice the effects, but sometimes as little as a couple of hours.  I’m going to continue taking this amazing supplement every day and look forward to experiencing its continued benefits.