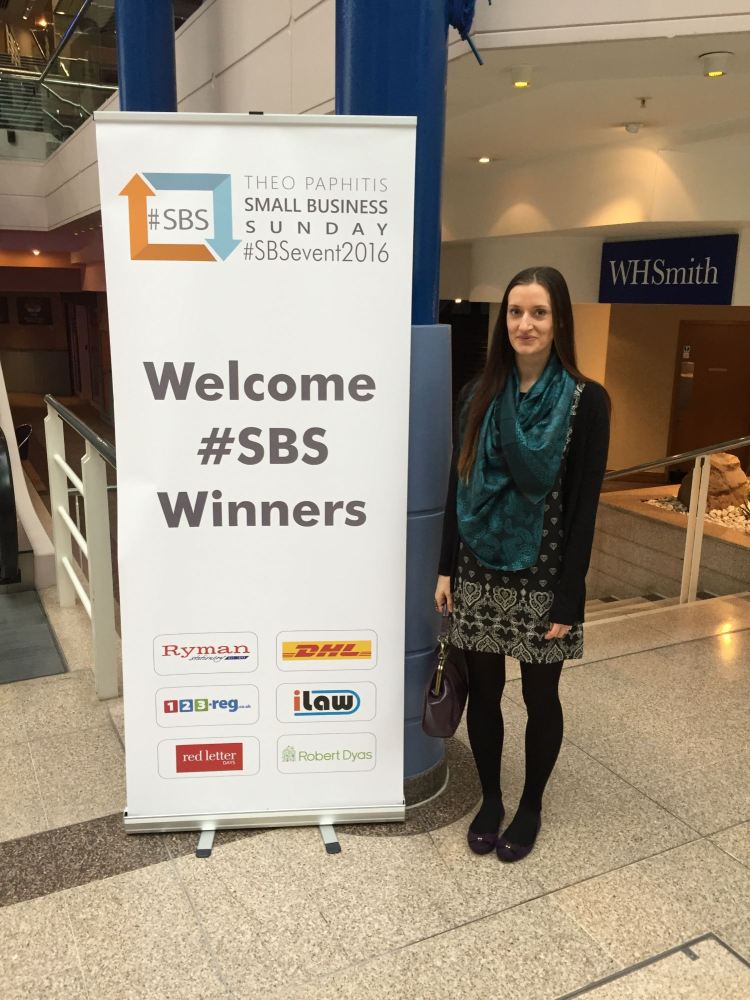 Almost three weeks ago on Friday 12th February at around 9.30am I very nervously approached the ICC in Birmingham to attend the 2016 #SBS Event.  For those of you who have no idea what I’m talking about SBS stands for Small Business Sunday.  It’s an initiative ran by Theo Paphitis (well known for being an ex-dragon on BBCs Dragons’ Den) which awards hard working small businesses on Twitter with a retweet to his hundreds of thousands of followers, as well as creating a community of SBS winners who regularly network, interact and support each other.

I won my #SBS award in October 2014, but unfortunately I did not attend the 2015 event last January.  I was super pregnant at the time (I had Reuben March 5th) and after originally deciding to go, I changed my mind.  I suffered with severe hyperemesis gravidarum during both pregnancies so was unsure how I’d be on the day.  I also had hyper salivation, pregnancy anaemia and numerous aches and pains.  I definitely am not one who blossoms during pregnancy, but rather the exact opposite.  I’m usually very fit and healthy and since having Reuben a year ago I think my only complaint has been one headache and no illness!  Pregnancy just really doesn’t agree with me.  I like to say I’m allergic to it!

It was also bad timing as I had decided to take maternity leave when I had Reuben, so my store was closing 1st March for up to 9 months.  I felt it was a little pointless attending a networking event and then closing my shop doors one month after!

Soooooo, I very patiently waited a whole year and could finally attend the 2016 event as my usual self!  And, what a day it was! 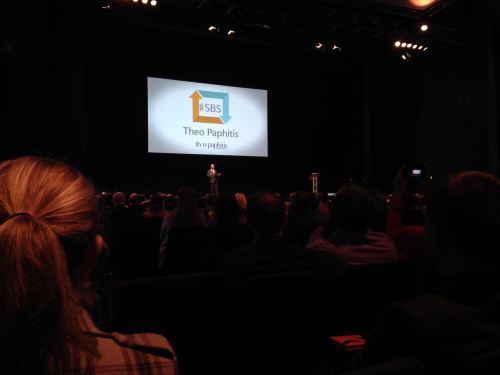 (That tiny person is Theo!)

I think as I had to wait so long I was even more excited.  Ben, my husband, came as my plus one and kindly chauffeured me.  I decided to just attend for the day (and not stay over like many others did) as it was only the third time I’d left Reuben.  It was the first time I’d left him for a whole day and with Ben’s brother.  I rang a good few times to make sure everything was OK, and of course, it was.  Luckily my three year old hadn’t then worked out how to open the stair gates!

We travelled from our home in Gloucester and in just under one hour I was shocked to see a sign for the ICC as I thought we had ages to go!  It’s a pretty quick journey from Gloucester to Birmingham, so not a bother to just visit for the day.  I attempted to do some work on my phone in the car, along with Twittering, but I just couldn’t concentrate!  I had ‘fuzzy head syndrome’ as I was so excited and nervous about the day with no idea of what to expect.

Once inside we popped our coats in the cloakroom, registered and collected our name badges.  The text was not very bold, so without quite obviously looking at a person’s badge, it was hard to know who was who.  I suddenly realised I hadn’t been organised in making a note of who would be there that I ‘knew’  from Twitter, I hadn’t properly arranged to chat to anyone and I had no idea what anyone looked like!  Oops.  Next time I will make a list of everyone I definitely want to meet and be sure to let them know what I look like on the day or where I am standing.

I’ll also make sure I do stand in the networking area next time.  I find it a bit hard to start a conversation with someone.  I’m usually fine once I get going, but it’s that awkward asking a random question to start it off and worrying whether the person will just ignore me, be blunt and/or walk off!  I definitely have a little social anxiety.  There were so many people (1500 attended I believe) during lunch/networking time, I decided to just sit down!  Probably not the smartest move for meeting people!

I did post a couple of photos of me on the live hashtag feed for the day and a couple of lovely businesses I network with found me!  I was super pleased to meet Lara from @corporatebaby, Helen from @fivesixblue and Tracy from @thebearrabbit after showing a photo of me or exchanging messages.  All very lovely, inspirational people and we had wonderful conversations. 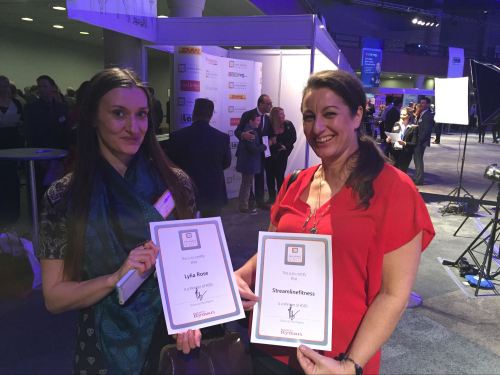 (Me & Kathy @streamlinefituk both very proud with our certificates!)

When taking our seats and watching Theo and his guests I noticed the badge on the chair next to me said @streamlinefituk – ah ha, I gave Kathy a little nudge, pointed to my badge so she knew who I was and big ah-ha faces and grins were shared.  Everyone was quiet listening to Theo speak, so we mouthed we’d talk after.  I recognised Kathy’s Twitter name right away as we have often chatted in hashtag hours.  Well, we got on brilliantly and spent a fair amount of the day together chatting as well as queuing for our photos with Theo.  It was a pleasure to meet Kathy and I’m so glad I randomly sat by her.

I recognised Eve from @barmy_bunting as I’d seen her photo a few times on Twitter at many of the other awards events she’s attended!  Eve set her business up as a school project when only 14 years old and has successfully continued with it.  It was a pleasure to meet Eve and I wish I’d had her business passion and enthusiasm in my teenage years, it’s very admirable.

I just caught Dylan from @aquadesigngroup at the end of the day and we chatted about his ‘Twitter Geek’ range, which I feel is very apt for me!  I also noticed Chrissie from @amshire and we had a lovely hug!  Hopefully next time we’ll be able to have a good natter.

There were so many people I sadly didn’t get to meet, which is why I must remember to be more organised (and brave) next time!  But the whole day was so motivating and inspirational and totally worth it, even if you are too scared to approach anyone!

Mike Pickles from Really Useful Products was one of the guest speakers.  One of the most memorable moments during the Q&A session was when Theo said something along the lines of ‘but Mike, you just ship boxes of air around the globe?’, to which Mike replied ‘no, I sell intelligent plastic’.  He went on to say he doesn’t sell storage, which many people don’t want, but instead organisation, which everyone does want.  The point being it’s all about how you sell your items by creating such a compelling reason for why people need your product, they simply can’t say no.

The best quote from Theo had to be ‘the harder you work the luckier you get’.  I hope this is true as like one of the panel said, they thought they’d always worked hard, until they ran their own business and realised what hard work really is.  I can definitely relate to this.  I’ve always been a diligent, proud hard worker and give my all to everything, but trying to run my own business really does take these qualities to the next level. 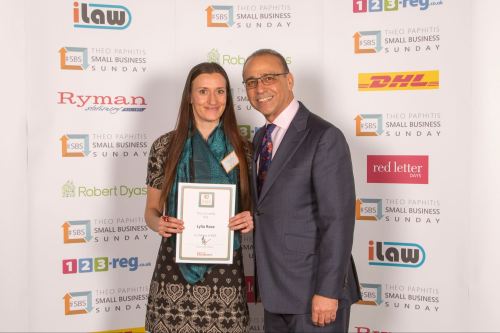 (Gutted I didn't have my new teeth yet for a less smarmy looking smile!!)

The highlight of the day had to be getting my official certificate and photo with Theo.  Both are now proudly framed above my desk, along with my name badge, as a great reminder of the day.  Theo must have been stood for hundreds of photos, so sadly there wasn’t enough time to talk, but I managed a quick ‘thank you for today’ and he said ‘well done’ and ‘have a safe trip home’.  He had a genuine happy smile to greet each one of us and really did seem so pleased to meet everyone (and fair play to him standing for so long, smiling and having his photo taken with his beaming winners!)

The most exciting news of the day has to be the SBS Shop.  Eeek!  It will be an online marketplace exclusively for SBS winners to sell their products (and eventually to list services in a directory too).  It should launch the first week of April and will give us the opportunity to buy from each other in one place, as well as reach one another’s customers benefiting us all.  No doubt it will make even more small businesses really want to win a SBS award.  Win-win all round!

It was a fantastic experience and I’m so pleased to be a member of the SBS community.  If you have a small business and use Twitter, be sure to tweet @theopaphitis on a Sunday between 5pm and 7.30pm about your business and include #SBS.

You never know, we could meet at the next #SBSevent :)