We were kindly sent a TOTSUP ‘Big Red Bus Reward Chart’ to review with our daughter Bella.  Bella is almost four and has been going through a ‘threenager’ stage for a good few months now!  We thought it was easing at one point, then she seemed to get a million times worse!  She’s not a naughty child, but learning right from wrong, asserting independence and pushing boundaries like any normal three year old.  It can certainly be frustrating as a parent and there are days when no amount of pleading or bribes of treats will work!  There are also days when Bella doesn’t seem to care if I raise my voice, get upset or angry.  She’ll just carry on doing the exact opposite of what I’ve said.  Grrr!

We had tried rewards charts, but with little success.  She’d be rather excited by them for a day or so, but would quickly revert to the unwanted behaviour and not seem bothered by the promise of a reward.  We’d only tried printable charts with star stickers and they were pretty boring, resembling a worksheet rather than something fun and interacting.  I was unsure whether the bus would be any different to the charts we had already tried, but the reviews were very impressive and it looked so much more fun than a bog standard sticker reward chart.

Would Bella be convinced? 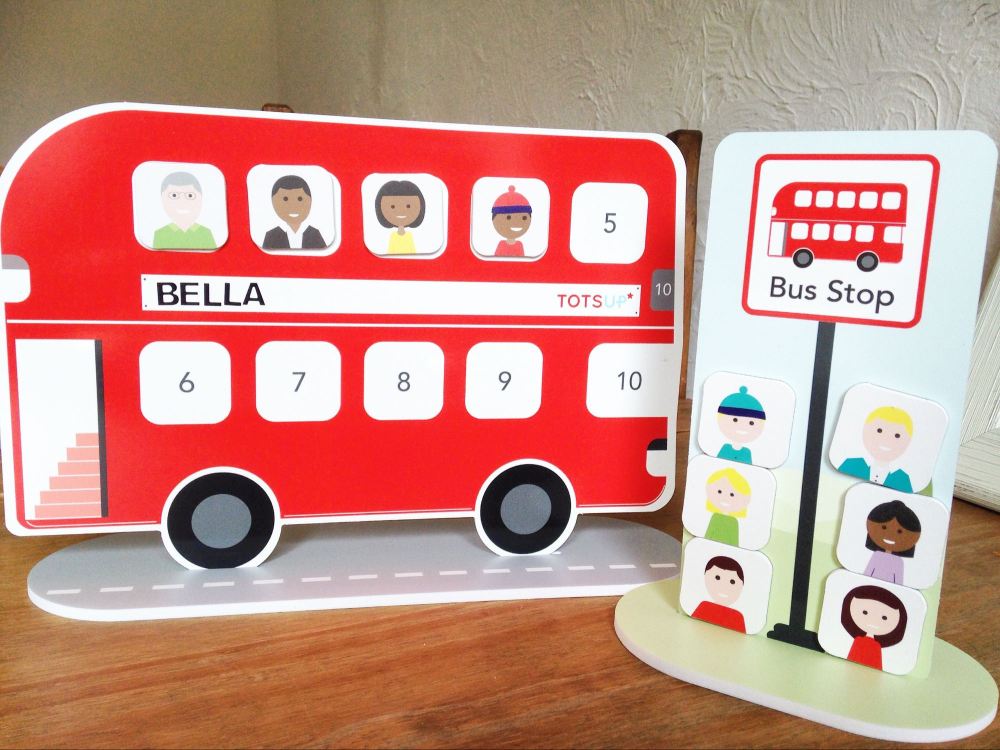 Before the bus arrived I showed Bella the bus online, so she was excited as soon as it arrived.  She already knew what it was and I’d explained the concept.  I decided to try a different tactic with the bus and purchased a reward for her to see.  Rather than just the promise of something once the bus was full, I purchased a fruit baby pouch and a Peppa Pig magazine.  I told Bella she could have the fruit pouch once she had five passengers on the bus and the Peppa Pig magazine once ten passengers had filled her bus.  I popped both rewards on top of the fridge – in sight, but out of reach.  This tactic seemed to work as she really wanted both treats particularly as she could see them!

The rewards don’t have to be physical goods, but could be a trip to a park of choice, playing a game of choice, visiting a friend, having two bed time stories instead of one, and so on.  I plan on changing the reward each time we start over with the bus.  It will keep it exciting and give Bella something new to look forward to each time.  Perhaps she can even start making up the rewards herself, as long as it’s not chocolate, ice cream and sweets!

The bus comes with some reusable alphabet stickers so you can name the bus anything you like.  We called it Bella as it’s Bella’s, so it’s the Bella Bus!  It’s great the stickers are reusable as we can rename it once Reuben is old enough.

The bus and bus stop simply slot into the bases and you’re ready to go.  There are ten magnetic passengers who can be placed on the bus stop until they are ready to move into their places on the bus.  Ours is on top of the fridge where Bella can clearly see it every day and I can get it down each time for her to move the passengers over or we can do it for her.  She’s quite happy just seeing the bus and taking note of how many passengers she has.

Almost instantly Bella wanted to get passengers on her bus.  We’ve rewarded Bella with passengers for being kind to her little brother Reuben, getting dressed by herself and going to bed on time without making a fuss.  The promise of a passenger if she listens to Mummy and Daddy, is good and does simple tasks by herself has been enough for her to be unusually good this entire week!  She’s even said to me ‘Mummy, what can I do that’s good today for a passenger?’ – wow!  We’ve seen a total change this week and it’s been a much calmer, happier week in our household!

Within four days Bella had her magazine and she was so chuffed!   Once she had her reward we moved the passengers over to the bus stop to start over.  For our second go, Bella will receive a fruit pouch once she has ten passengers.  Bella is already up to five passengers and is still super keen to fill the bus.  Bella loves dashing into the kitchen to count how many passengers she has and work out how many more she needs.  It’s great for counting games too!

I’ve also found we’ve been more positive in our parenting approach this week.  Rather than only focusing on the negative behaviour, we have been praising Bella’s good behaviour which in turn has encouraged her to continue with such welcome behaviour.  I took Bella to the soft play this morning and when it was time to go she left without fuss.  Last time I had to chase her around the soft play begging her to leave!  Today I said ‘Bella, it’s time to go home now and as you’ve been so good playing with the other children you can have a passenger on your bus once we’re home’.  With a big grin she followed me, popped her boots and coat on and reached for my hand.  Amazing!

I am so impressed with the bus reward chart and would highly recommend it.  It has been an instant success in our household with Bella and we shall continue to use it to encourage wanted behaviour.  It’s more appealing to children than a standard sticker chart, feeling more like an interactive game than simply a reward chart.

To read the fab story of how the business was started and learn more, have a browse around http://www.totsup.co.uk/