Welcome to my monthly family roundup - a chance for you to see the person behind this UK money blog in a personal lifestyle blog post.

July has been and gone and now we are racing towards Christmas.  Sounds crazy, but now we are in August it’s only four months until the festive season which will go by in a whizz.

July was a busy month as Bella finished her last year of infants (oh my goodness) and Reuben finished at one of his pre-schools.  He goes to two and the other continues through the summer so he’ll finish that one just before he starts school.

It was the start of the summer holidays, Ben’s birthday, a last minute holiday for us and Ben left his employment to embark on his self-employed adventure.  He had worked at the same place for nine years, so it’s going to be quite a change!

I thought he’d be so happy on his last day at work, especially after having to give 12 weeks’ notice, but he came home quite subdued.  I thought he’d be buzzing, but he felt quite strange and couldn’t put his finger on it.  I think perhaps the reality hit home!  He’s on his own now.  There’s no guaranteed pay check at the end of each month.  It’s up to him to make the money and find the work constantly!

So July was a month full of highs and lows.  Highs because everyone is moving onto the next chapter of their lives, well Ben, Bella and Reuben.   But also lows as they all leave the comfort of what they knew behind them - infants, preschool and work.

Watching the planes take off at The Aviator, Staverton, Gloucestershire

Introduction to my monthly family roundups

Welcome to my UK family lifestyle roundup.  Here’s my introduction if you haven’t been here before.  It's a monthly roundup where you get an insight into the person behind this blog and what my little family and I have been up to for a whole month.  It's also a place for me to document our lives each month and save them in this category so we can look back through them and remember what we've done!

If you follow me on Instagram then you’re probably up to date!  But here is a more in-depth blog post of things we’ve been up to, some more photos and family happenings.

This blog post takes a look at some of our family highlights for June 2019 in detail along with some photos.

Reuben makes a R with lego!

At the end of every school year is a sports day.  Unfortunately Bella dreads this time of year as she doesn’t like to race and isn’t competitive in the slightest when it comes to sports.  So sadly she was dreading it for weeks once they started practicing.

When Bella was in reception class she stopped as soon as the race began and the teaching assistant had to rescue her and run with her!  In year one she dreaded it again, but she completed the race and didn’t come last so it gave her a real confident boost, though we explain to her that coming last doesn’t matter and someone has to come last.  We hoped she’d be OK with sports day in year two, but it was horrible to see her worry about something for so long.

I would like her to take part, but perhaps the children who aren’t competitive and don’t want to do the sprint can just take part in a relay or obstacle race instead.  Bella much prefers the relay when she gets to work with others.

Anyway, she completed the race, came last, got a sticker and all was well.  It was just a shame she had to be so anxious about it for weeks before :(

Reuben wears the same outfit as Bella on sports day!

Surprisingly, Bella wanted to do tennis club!  It was a short four week program after school.  She did great and I got to see her on the last session.  I was so impressed.

She wants to restart street dance and also try gymnastics when she goes back to school, so hopefully she’ll find something active that suits her and she enjoys.

End of an era

July really was the end of an era for Ben, Bella and Reuben and I even felt like it was for me.  Ben finished work, Bella finished infants and Reuben finished at Busy Bees (one of his pre-schools).  I felt like it was the end of an era as I have been taking Bella and then Reuben to Busy Bees pre-school for five years straight!  It’s a lovely pre-school on the school grounds that my children go to.  The staff are wonderful and even though I’ve been dying to get out of the baby/toddler stage, I actually felt a little sad that we won’t be going to Busy Bees anymore!  But I definitely don’t want any more babies!

Reuben only had one hour at his new school to be in the classroom and meet the teachers.  It’s all they do, plus pre-school visits.  He is very excited to start school and we even have all his uniform and shoes.  He doesn’t understand the concept of time yet so he keeps asking when he’s starting!  Going into the school confused him even more as he thought he was ready to start then!

Ben left his job two thirds of the way through July!  He’d been there nine years at Superdry head office working as an IT service manager for the last few years.  It’s where we met as I previously worked there for 9 years too.  So that’s also an end of an era for us!  No more Superdry.  Quite crazy.  I started before Superdry even began and it was Cult Clothing.  It was definitely a big part of our lives and we found each other there, so we will always be thankful for working there for that! 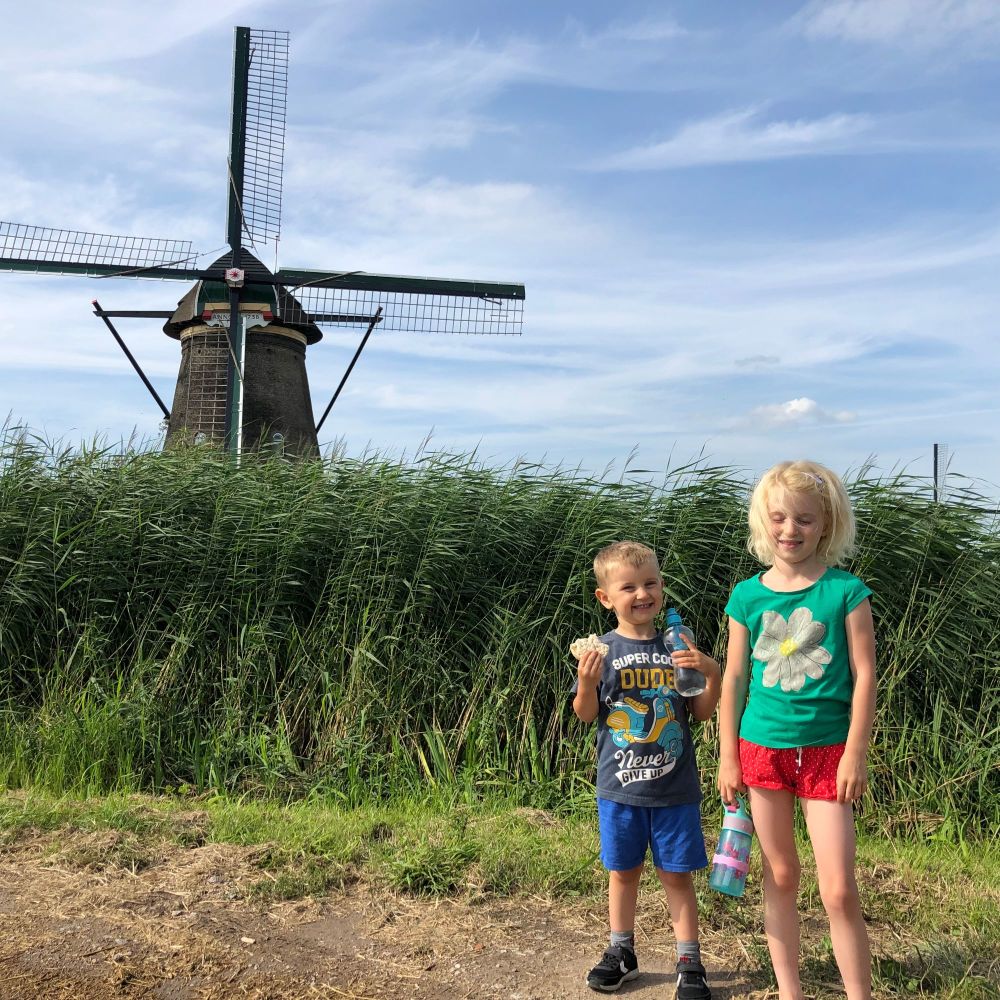 Before Ben dived into full-time self-employment we decided to take one week off to visit his Gran in Germany.  We usually fly out, but it’s so expensive so we decided to go in our Mazda Bongo camper and see if we could do it cheaper!  It’s a long drive so we stopped in Amsterdam on the way and Bruges on the way back!

We crammed a lot into eight days and drove a total of 1700 miles!

You can find the whole travel diary and loads of photos on my travel blog Travel Vixta.  Here are the links:

Europe family road trip day 8 – back to the UK 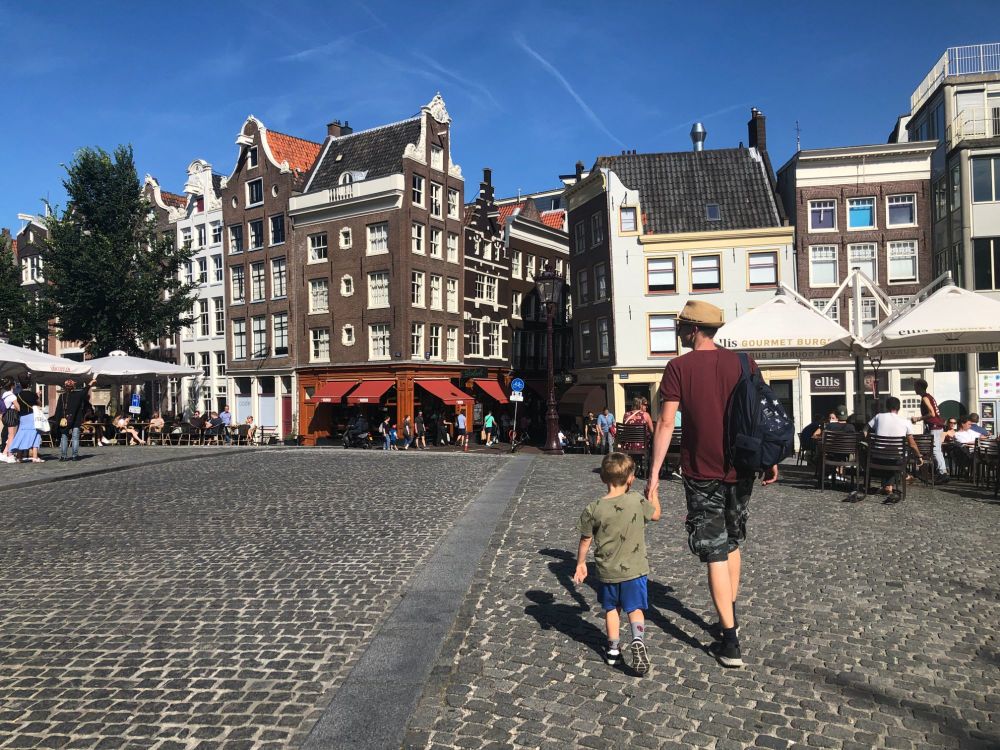 Vegan food at The Swan, Cheltenham

Once we got back to the UK there were a couple of days left in July and it was back to normality, kind of.  It was the summer holidays and the kids went to holiday club on the first day back.  I had a stack of blogging work to catch up on and Ben had a desk to make for his furniture business!  My mum had the kids the next day and we went out for a meal kid-free to celebrate our birthdays!

Ben’s birthday is in July and mine is eight days later in August!

I’d been dying to go back to The Swan on Cheltenham High Street for ages as they had a great vegan menu when I went last year.  They didn’t disappoint!  They had a new vegan menu with so much good vegan pub grub from giant vegan mozzarella sticks, to burgers, salads and pie!  We had a burger each, chunky chips and mozzarella sticks!

I highly recommend The Swan for great vegan pub food in Cheltenham if you’re ever there!

Aside from our exciting road trip at the end of July, the rest of the month was just pretty hectic with working lots and end of school activities.  Ben was already doing his self-employed work around his full-time job which meant he was working pretty much every evening and weekend to fit it all in.  He was basically working two full-time jobs for a few weeks whilst he worked his notice period!

August will be an interesting month as Ben settles into self-employment!  I’ll let you know how that goes next month.

If you are wondering what he is now doing, he’s a handyman in Gloucester and also sells custom handmade wooden furniture!