I’m a bit late for this family roundup, but here is what we got up to in February 2019.  Watch out for my March roundup soon!  I was debating whether to carry on with these on this blog, but I think it’s a great way for my readers to see the real life person behind this blog and they are also great for me to look through myself!  I was browsing through the other day and couldn’t believe the white blonde colour of both kids hair a couple of years back!  These roundups are a great reminder to me of what we’ve been up to and to see some of my favourite family photos.

Scroll down if you’ve been here before or read the next part if you’re new to my family roundups.

If you follow me on Instagram then you’re probably up to date!  But here is a more in-depth blog post of things we’ve been up to and family happenings.

Let’s get the rubbish part of the month out of the way first.

February was a tough month for my mood.  I have come to realise over the past few years that I suffer with seasonal affective disorder.  We really realised it did happen last year and this year has been even worse.  My mood and anxiety starts worsening in December, probably when all my vitamin D runs out, and then it’s really awful in January and February.  I’d say February was just a write off for my mood!

Anxiety about all sorts of things went through the roof.  I felt sick to my stomach most days as I worried about so many things and had a constant feeling of a blockage in my chest.  My thoughts darkened and everything in my life felt wrong.

Last year we realised I was a lot lower in the winter months and so back then I started taking vitamin D tablets to see if they had an effective on this winter.  Unfortunately even though I took them every day and had been for a year they didn’t make a difference.  In fact my mood was worse this winter than it has ever been before and I entered a much darker place.

I really don’t think I was made for the UK climate and I need the actual real sun and warmth.  I’m sure we get so much more than just vitamin D from the sun and there are those of us that feed off the sun and really do need it for our overall wellbeing.

I’m probably my own worst enemy when it comes to bouts of depression and anxiety because of SAD as I just want to shut myself away and be on my own.  I want to hibernate and not see anybody.  Yet getting out and about and socialising and talking to people can make the world of difference.  Luckily I have a couple of friends who do understand and I managed to connect with them during the month.  It’s a hard topic to bring up with most people as unless you suffer yourself, you don’t understand.

The end of February is mine and Ben’s anniversary for when we got together.  It was our eight year anniversary!  I often joke that we got through the ‘seven year itch’!

So now I have ticked one thing off!

We went tubing at the dry ski slope in Gloucester which is really close to our home, yet I’ve never been there before even though I’ve lived in Gloucestershire my whole life!

It was fun and I’m glad we tried it, but it is probably more fun for kids!  They did say their water pipes had burst and weren’t working, so maybe it’s better if they are, but the tubing wasn’t very fast and I even stopped a couple of times!

It was still good to have a day with Ben and to try something different. 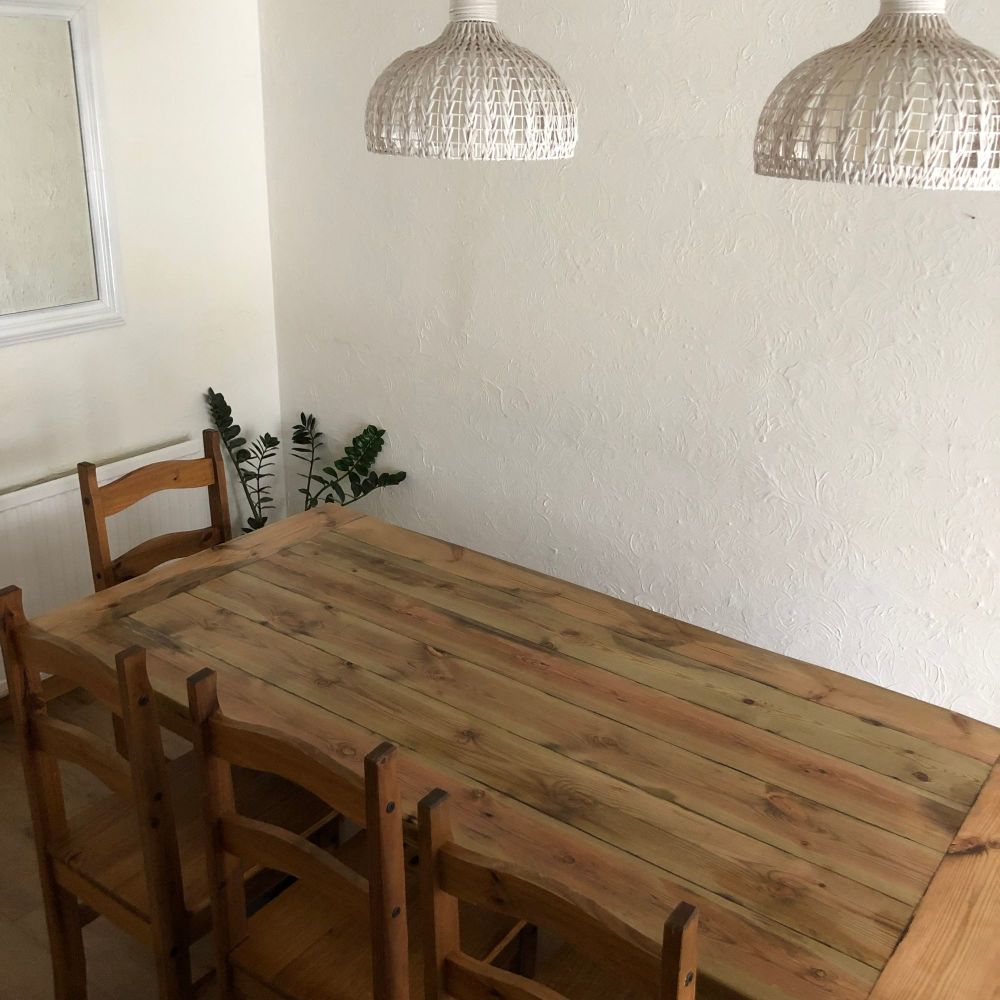 Whilst we’ve not been going out as much as it’s freezing outside and I can’t stand being cold (can anyone?), I managed to badger Ben into doing a few things around the house: 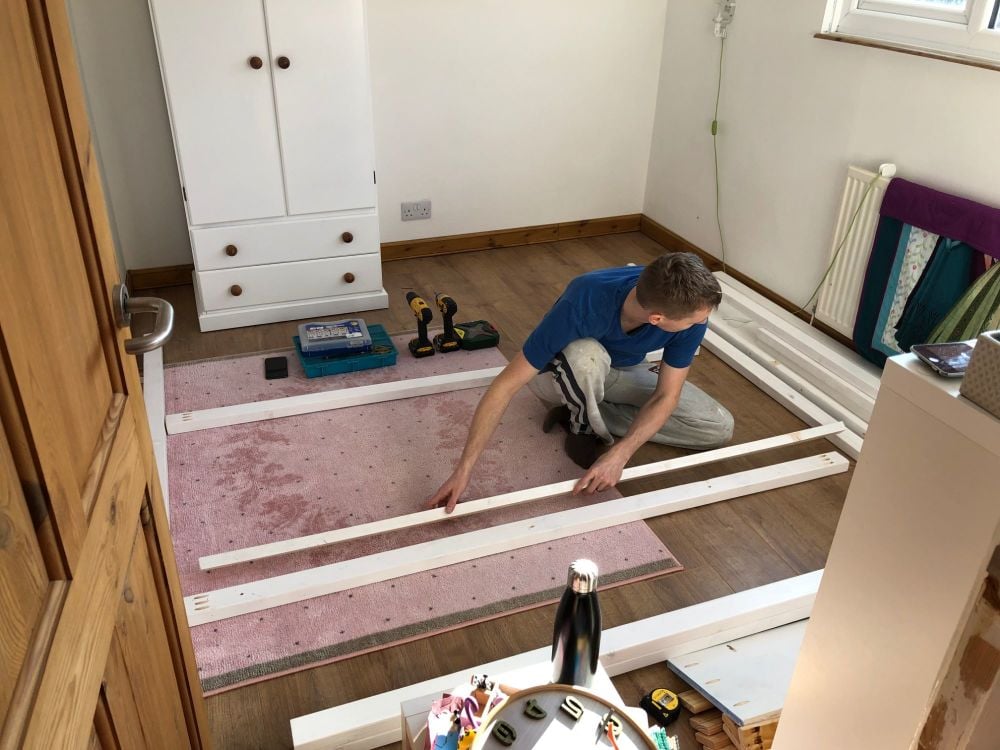 Photo shoot for The Guardian

We had our first experience of a photoshoot for a newspaper this month.  I took part in an email interview for The Guardian about how a regular family budgets.  We had a three hour photoshoot with a photographer and her assistant coming to our home to get a few family shots and also photos of me on my laptop.  It was definitely a fun experience and out of my comfort zone which is why I said yes!  I was asked in January and being a New Year I thought just say yes and give it a go.  It was good to realise it was totally fine and not scary at all!

Vix features in The Sun and The Guardian 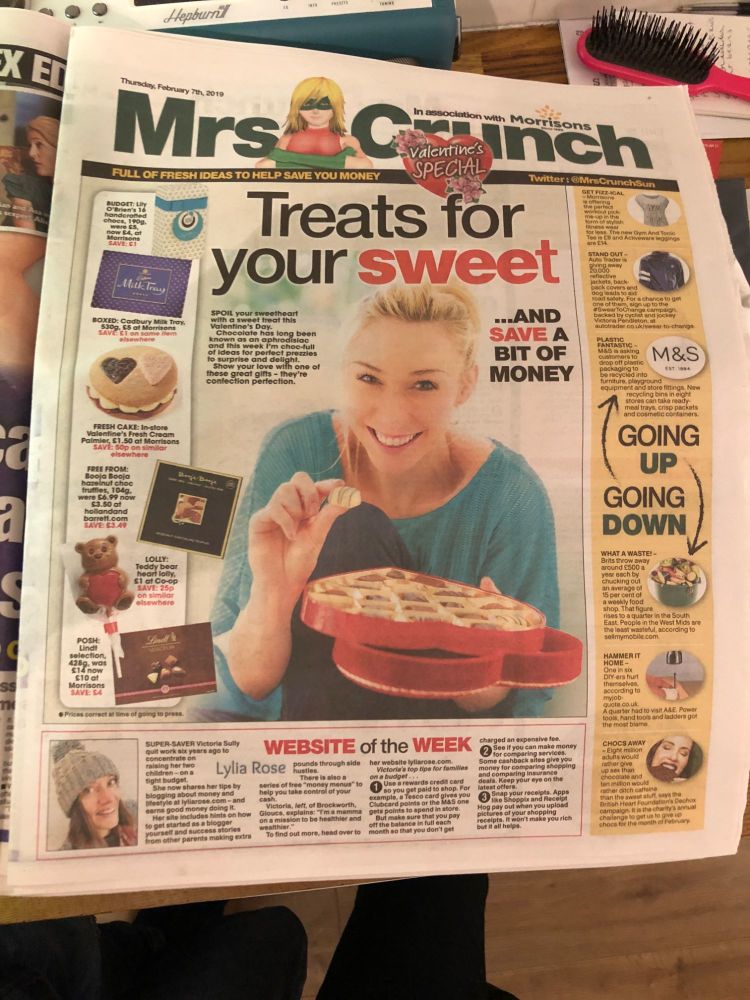 So we all featured in The Guardian alongside my interview, but I also had two features in The Sun in February too!  One was as ‘website of the week’ in the Mrs Crunch insert in print and the other was a breakout box in the middle of an article about how Emma Drew earns £100,000 a year from blogging to share how I earned £26,000 from blogging in a year. 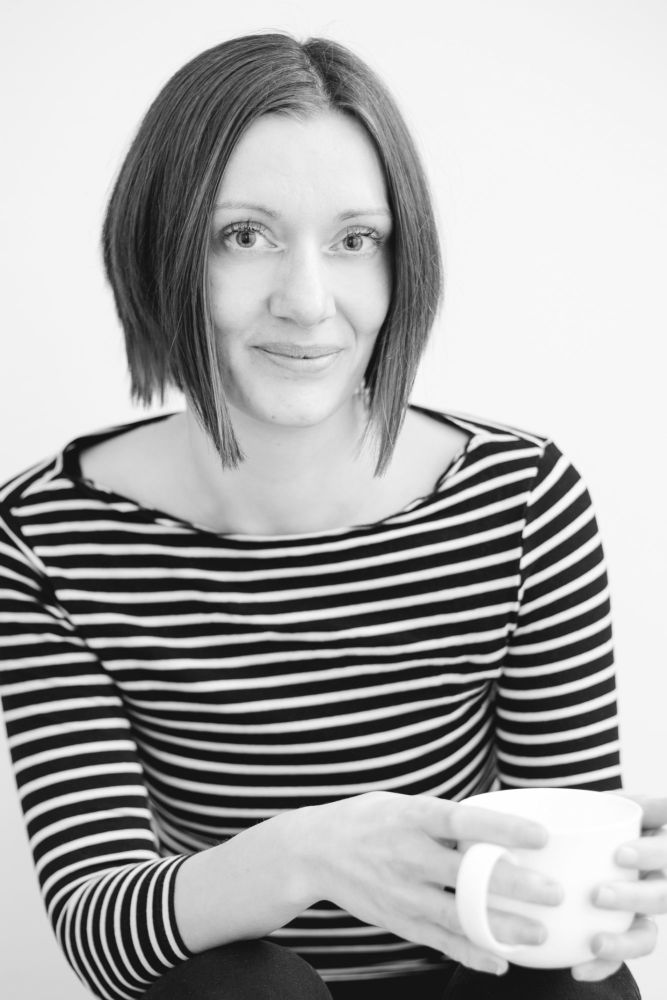 I had to send a photo of myself for The Sun features and I often complete interviews for various websites and need to send a photo.  I’ve only ever had selfies to send and thought it was about time I had some professional photos taken.  I got in touch with my friend who is a local Gloucestershire photographer called Fiona Lord and she agreed to take some headshots of me for a very reasonable £49.  I’d definitely recommend Fiona Lord if you need some headshots and her main focus is bespoke character portraits which are amazing!

You've probably noticed my professional headshots on my home page and dotted around my website and social media profile images.

Vegan meal at The Coconut Tree

I really need to get out more with friends.  I probably meet up with a friend once per month and with working at home I really can start to feel quite isolated.  I can go for weeks at a time only seeing Ben and the children!  I’m going to try and get a bit of my own life back this year and meet up with friends more when possible.  It is always tricky as I only have a handful of friends and we nearly all have our own businesses and young children.

I did go to The Coconut Tree with my friend Nadine.  It’s a lovely quirky bar and restaurant in Cheltenham which serves Sri Lankan street food and has loads of vegan options.  I loved the vibe in there in the evening, the tapas style food and the raspberry iced tea!  I’ll definitely go back.

We had half term for one week and it was pretty normal.  The kids stayed at my mums for two days and they went to holiday club the other days so Ben and I could work.  It was just a normal working week for us really, so nothing special to report here!

Savings goals are on track

This year I have a big savings goal of £10,000.  This will be a super emergency fund to cover a real emergency, to provide us with security as I’m self-employed and also because Ben wants to go self-employed so we’ll then have no secure income!

I would have reached this savings goal last year, but had to unexpectedly go private with my dental treatment which cost around £2500 more than I was expecting to pay on the NHS and we also had major car repairs – around £3000 over three repairs on both of our cars!  Ben also needed a storage shed for his new business venture so we loaned his business £1000.  Our savings took quite a hit in 2018, so now it will take us probably the whole of 2019 to get to the £10,000 goal which we would have reached last year if we didn’t have all these huge payments going out.

The Bongo is due its first MOT since we had it in May so we’re pretty nervous about that!  We’ve already spend thousands on it in repairs and updates in less than a year.  I just hope there’s nothing major wrong as we can’t justify keep spending loads and sinking all our savings into it.

Luckily we are managing to save plenty each month and finding ways to make more money where possible.  We’ve been decluttering the house to sell bits and pieces and any spare time is spent working on our businesses.

Read more about this here: Why I’m choosing to save an emergency fund before paying off my debt

A big WOOHOO for February is my teeth are finally, finally complete!  I had some bonding on the teeth next to my bridges and the front two teeth filed down a little and that is it!  I’m so glad that my whole braces and bridges journey is now over and I can return to regular dentist appointments.  I was becoming part of the furniture at the dentist and orthodontist for a while there!  It was quite a journey – over two years – and you can read all about it in my category Braces at 30.

We had snow!  I was totally dreading it, but actually it was fine.  I think I was just keen for winter to be over so the thought of having snow didn’t impress me at all.  But it had its silver lining… the kids couldn’t wait to go out in it so we had the easiest school run ever!  Everyone was happy and relaxed!  You can read my blog post why I hate the school morning routine to see what it’s normally like!

Even though I was totally miserable for most of the month we actually managed to still pack quite a lot in and have a productive month with business, home improvements and savings goals.

Pop back to my Monthly Family Roundups shortly to see what we got up to in March!