When you are looking at potential career options, it makes sense to look at what you enjoy doing, what you are good at doing, and how much you could get paid. After all, it doesn’t matter how much you like something or how much job satisfaction you get – you’ve still got to pay the bills and earn enough money each month.  Luckily, if you like tech and computers there are a lot of career choices in this field.  So, how much money can you make working in the tech industry in 2022?

According to the U.S. Bureau for Labor Statistics, BLS, the median wage across the United States in 2021 was just under $46,000 a year. The median wage for people working in computers and tech was more than double: over $97,000 a year. So, at first glance, it looks like you can definitely make more money in tech than in most other sectors.

The tech industry is worth big bucks: most people own some level of tech that requires updating and reinvestment on an ongoing basis. In fact, according to the Consumer Technology Association (CTA), the U.S. tech industry made a massive $487 billion in sales in 2021. Thanks to the pandemic, schools, employers, and homes are investing in technology more than ever and this trend is not likely to slow down any time soon.

Not all tech jobs are worth serious money; working in the Apple Store may get you $15 an hour, while computer support specialists earn £58k per year on average and computer and information research scientists earn an average of $131,490. Let’s take a look at some examples. 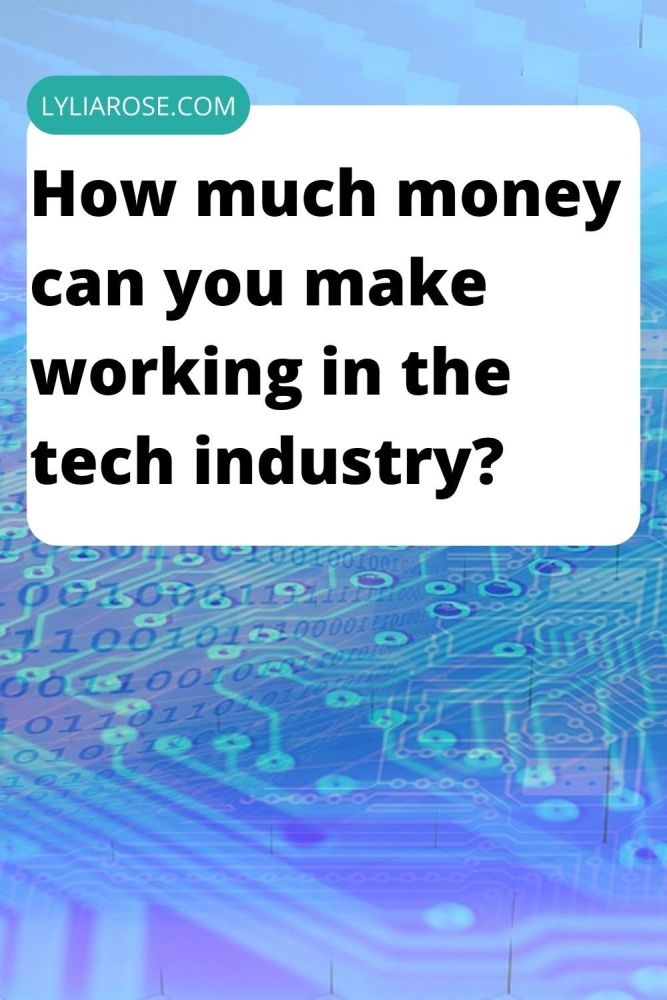 Software developers are in high demand. While Java is popular for big data, cloud dev, web dev, and app development, Python is usually preferable for back-end development and data science. According to Indeed.com, communication is a critical skill, with good communicators earning more than 8% more than average.

Not every tech job is completely digital. Network engineers perform a critical role, making sure that systems run smoothly and performing system maintenance and upgrades as required. The combination of hands-on and technical knowledge is a perfect combination for people who love data, but who like a varied role.

DevOps engineers work alongside a range of personnel including software developers to maximize the SDLC – software development life cycle. They analyze data, provide tech support to the team, coordinate workflow and code releases, and fix bugs.

A data scientist gathers, analyzes and disseminates data, extracting information that is valuable and usable to their organization. The role goes beyond just gathering data and includes building complex tools that help to automate the process to provide a rich source of information. In an industry where data is key, the data scientist plays a leading role.

So, how can you influence the amount you get paid in the tech industry?

Learn independently – This digital era hasn’t just created a huge number of tech jobs, it has provided people with the opportunity to take less traditional routes to gaining professional skills. Don’t have a Master’s degree? Don’t worry. In fact, in some cases, you don’t even need a Bachelor’s degree to pursue a career in tech. Thanks to more flexible online learning methods that were used with success during the pandemic, people can get a degree or other qualification online. This option is cheaper and offers more flexibility, allowing people to retrain for tech jobs now while earning money in another industry.

You might not need a degree - One of the many great things about the tech industry is that you don’t necessarily need a degree at all. Because of the shortage of tech talent, and the recognition that some gifted people may not have degrees, more forward-thinking organizations are scrapping the requirement to have a degree when advertising a role. This gives them a wider talent pool to select from. The money may not be as good initially if you join a company without the qualifications and skills, but with investment from your organization and a little hard work you can soon be earning as much as graduates.  To get a head start in tech without a degree, it can help to complete an online course to show your general abilities and commitment to the role.

Be flexible - The digital revolution has seen everything change. How, when and where people work isn’t decided by practicalities anymore; in general, if you can get the job done well, employers don’t care if you are doing it from their office or from a tropical island. This means that there are more people available to take on tech jobs because they are not limited as much by geography. This also means that salary isn’t always the most important thing; flexibility, ethos and work environment are big selling points too. So, you find your dream job and it doesn’t pay quite as much as you need, because you live in an expensive area. According to CodeClan, the best places in the U.S. to work in tech in terms of salary, job availability, and broadband speed include Atlanta, Washington, Seattle, St Louis and Pittsburgh. If a career in tech is your dream, it may be worth checking out the list and making that move.

Know the industry – a good understanding of the industry in general and the organizations that you are considering applying for will help you to make wise choices when it comes to getting the best pay for your tech job. In this time of mass change, some jobs may be automated in the future, so there is no point in retraining if it will be done by computers eventually. Currently, there is high demand for

Wising up for maximum salary doesn’t just mean picking the right career, it means picking the right company, too. Whilst the big companies like Apple, Google and Amazon may pay their top talent large amounts of money, the competition is fierce, so it is unlikely that you will reach those levels. Medium-sized organizations will probably offer medium salaries and medium competition/risk. Start-ups have the most risk and may have the lowest salary, however, if it succeeds you could be in a prime position to take one of the highest salaries.