MrBeast is a YouTube sensation with a self-made fortune. He's known for his stunts and antics, but what are his true intentions?

Jimmy “MrBeast” Donaldson has become one of the biggest YouTube stars and the richest.  His YouTube channel called MrBeast hit 100 million subscribers in June 2022.

Yes, you read that right, ONE HUNDRED MILLION.

Some of the most popular videos involve MrBeast giving away pretty obscene amounts of money… often tens of thousands of dollars right through to a million dollars to some lucky contestants on his YouTube show.

There are pranks, stunts and challenges, but also acts of kindness such as when they damaged someone’s car while filming, so they camped next to it and gave the guy a wad of cash, way more than the car was even worth!

It’s this giving nature that I’m sure has earned him such a large viewership and such success.

While many other young YouTubers (Jimmy is in his early 20s) would simply splash all the cash, MrBeast continuously gives his money away in staggering sums.

Why does MrBeast give away free money and what is the real motivation behind this?  Kindness?  Success?  Popularity?  Riches? 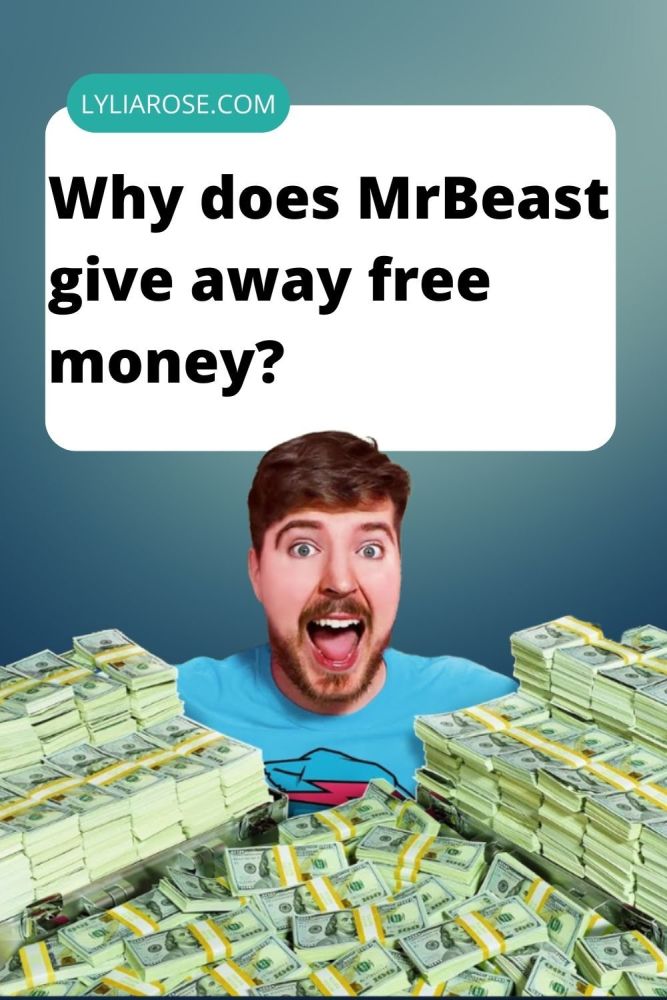 Why does MrBeast give away free money?

According to Jimmy, from his interview on the Joe Rogan podcast, money isn’t important to him and being rich is not what drives him.  His obsession is quite clearly YouTube, growing his channel and making the best videos on the planet.  However, the money made certainly helps to lure people to his channel and enable him to make better content.  He even has his own warehouses and studios!

Money helps in keeping his channel as popular as it is, as without all that money he wouldn’t be able to convince people to take part in his viral video type stunts.  Seeing someone give so much cash to others which can literally change their lives also entices people to watch his vids.

Giving away free money helps MrBeast grow his YouTube channel substantially and aids to his popularity.

So although it might not be important to him to have money personally and he doesn’t feel he needs to be rich, money definitely allows him to pursue his dreams and become the most popular YouTuber of all time.

Also, it’s important to note that he doesn’t need to give away his own personal wealth in his videos.  Due to his popularity, engagement on his videos, viewership and number of subscribers, brands pay significant sums of money to sponsor his videos in exchange for mentions and it’s this sponsorship money he gives away.

Still, most YouTuber stars would keep this money all to themselves.  But MrBeast is a businessman and realises if he gives away this cash it will lead to more viral videos thus growing his channel, popularity and business.

As The Sun explains:

“MrBeast is able to give away large sums of money without it affecting his personal net worth due to brand deals and video views.

He began his donations when he started getting sponsorships from companies, such as Quid.

He started giving money away to whoever he could: the homeless, Twitch streamers, family, friends, and followers.

At one point, he walked around his city handing out $1,000 to multiple homeless people in the area.”

Although, on The Joe Rogan Experience, in his own words MrBeast says “Why do I need money?” after revealing he invests all the money back into his channel.  He goes on to say “I think living your life chasing a nicer and nicer car and a bigger and bigger box to live in is like a dumb way to go about life”

MrBeast is also a well-known philanthropist and while this could be to raise his profile, he also mentions to Joe Rogan that because he runs a non-profit, it is hypocritical to live in a ten million dollar mansion while trying to feed and help people, which, if it’s what he genuinely believes, gives him a lot more integrity than many other charitable stars.

Is MrBeast the most popular YouTuber?

Let’s look at some of the stats for MrBeast and whether he has the most subscribers or views on YouTube.

Jimmy was the highest paid YouTube star in 2021 according to multiple online sources, but doesn’t yet hold the record for the highest number of YouTube subscribers or views on a single video.  I wonder if that’s secretly his ultimate aim.  And if he hits these records too, I wonder what he’ll do next.

If you need a reminder of which video on YouTube  has the highest views ever with 11 BILLION views then it’s this catchy number:

MrBeast’s most viewed video to date is Squid Game In Real Life with 287 MILLION views.  Capitlizing on the success of one of Netflix’s most popular shows ever, Squid Game, Jimmy and his team actually built a real life Squid Game set and had real contestants competing for a huge cash prize of $456,000 just like in the show (but minus the horror and the murder)!

It was bound to be a viral video success and is hugely entertaining, especially for fans of the TV series.  The video continues to grow in popularity and you can watch the whole thing here:

And, if you're wondering, it’s YouTube channel T-Series who has the most YouTube subscribers at the time of writing.  In Septemer 2022 they have a whopping 224 MILLION subscribers.  So MrBeast is half way there!

How much money does MrBeast make?

Forbes estimates MrBeast raked in $56 million in 2021, a huge amount of money and proof of how YouTubers can make some serious buck.

Well we may initially laugh at young kids who tell us their dream is to be a YouTube star, it’s actually a lucrative career choice when done right.  Big YouTube stars like Jimmy are proof that a career as a YouTuber is nothing to be scoffed at.

Forbes also note he has made more than any YouTuber so far, thanks to his views doubling from 2020 to 2021 to an eye-watering 10 billion views in total.

Want to make some extra cash?

Find loads of ways to make extra money at home on my blog, as well as my favourite side hustle in my matched betting blog.

To get started, you can make money online with 60 methods I’ve tried and tested.

Short on time? These methods can make money in one hour.

Subscribe to our newsletter for the best free money offers, money-making and money-saving tips we discover!