I’ve now had my brace for three months.  It’s gone so quickly already.  So I could be 1/12th of the way through the process! Wohoo!

I’ve noticed some big differences lately, especially in the past two weeks.  I’m not sure most others will notice, but my Mum has.  I ask Ben if he can tell and he pretty much just shrugs!

The bite on my top teeth has REALLY changed.  When my teeth are resting or ‘biting’ the top teeth are now at least half a cm in front of the bottom teeth, maybe more.  It means it’s almost impossible for me to bite my front teeth together.  I can just about make two of them touch, but it feels like I’m pulling my bottom jaw out really far to do this.  I nearly choked on spaghetti the other day as it was long and I tried to bite it with my front teeth – not happening!  This is when I first noticed the change in the alignment of the teeth. 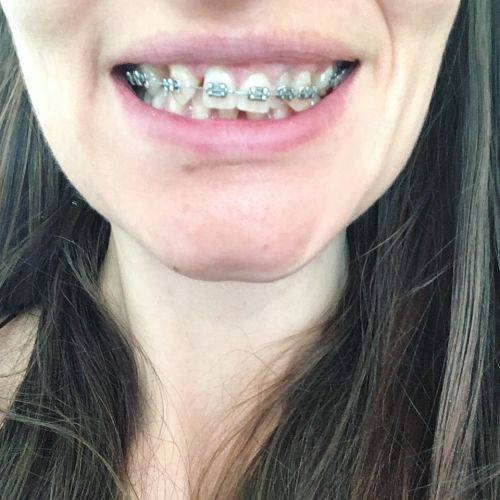 I’m looking forward to the bottom brace going on, hopefully at the end of the summer, and pulling my bottom teeth forward too so the bite feels more normal!  I can now see such a difference that I realise my teeth must really have been leaning into my mouth before.  It wasn’t a reason I wanted the brace and wasn’t anything I would have noticed before!

My twisted canine is starting to untwist!  Yippee!!  It was pretty much sideways before and is still wonky, but nowhere near as drastic.  I think by my next tightening in July it could even be the right way round! So exciting.  It’s been hurting a bit so I knew it was moving.

My front teeth are going wonky and they weren’t before!  Eek!  They are now on a slant.  I trust my orthodontist will sort this out.  They are also super sensitive.  If I talk outside and the wind catches them, yikes!  I’ve never had sensitive teeth so this is a new experience.

It’s still all going well and I pretty much forget I have the brace.  I’m used to what I can and can’t eat, so at home this isn’t a problem.  I think it may be more problematic when we go to BBQs/parties, etc!  But I can just avoid eating if I need to.

It's hard to tell the difference in photos, but I think you can see the tooth is starting to twist round & the alignment is much better.  My peg tooth has also moved back lots, it really stuck out before.